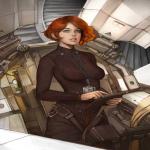 x 1 (20%)
Suppressed Pistol
Light Kinetic Weapon
+ Damage
This specialty sidearm is popular for discrete operations due to the effective sound and muzzle flash suppression system. It can fire almost silently and is easy to reload, though it does low damage.

x 3,000 (100%)
Embroidered Sport Dress
Utility Slots: 1
This attire is a respectable fashion statement for imperial citizens in any circumstance. It provides low defense and medium style. It can be worn in conjunction with armor modifiers. It is popular among public officials and nobility.

x 402 (67%)
Imperial Laser Rifle
Medium Thermal Weapon
+++ Damage
Built for use by Imperial Soldiers, this battle weapon will bring the might of the Emperor on your foes without hindering the aesthetics of the design. It can fire quickly and rarely needs to recharge, though it inflicts medium damage. Hacking Extender
Classified as an armor modifier, this simple collection of finger rings and a wrist band will allow the user to relay hacking targets to any hacking system in the party. It is ideal for targets out of range or for discrete activities at functions such as dinner parties. It will go unnoticed by most individuals despite the dramatic gesture it requires to work. It can be worn in conjunction with any clothing or accessories.
[User must web their fingers out toward the intended target.] Blade
Medium Kinetic Weapon
++ Damage
This highly adaptable sword is popular among gifted melee pilots. It can slice through many armors while avoiding attention generally created by thermal glowing weapons. The only downside to this blade is that it cannot clash against a thermal infused weapon without the risk of being cut into pieces.

x 500 (100%)
Stealth Boots
Classified as an armor modifier, this equipment muffles sounds caused from movement over a variety of terrain thanks to the work of computer regulated gel pads. While making the user silent it gives no armor benefits.

These market shares are in various small yet stable businesses from around the galaxy. Stockbrokers can sell them in Commerce Centers in exchange for High-Yield Stock.

The Diamond Market can purchase it from you based on the current galactic average.

Stockbrokers are professional traders who buy and sell shares on behalf of high profile clients. They can serve in Commerce Centers, managing investments on your behalf by selling Low-Yield Stock for profitable High-Yield Stock.