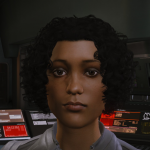 x 100 (100%)
Forculus HoloCard
For the odd individual with an appreciation of the simple things, or perhaps a sense of humor, the HoloCard will surprise your friends with 3D projected confetti, music, and a video recording from you! The card itself is only a few inches wide and celebrates the otherwise uninteresting Forculus system with an animated image of its only habitable city, Irrational Exuberance.

x 2,000 (100%)
Holo-Me Extender
This equipment can be installed at your location to extend your Holo-Me interaction ability in CMDR rented locations outside of the Diamond Plaza Hub. It is also useful for interacting with certain characters securely, especially characters in shadow.

x 325 (65%)
Armored Jacket
This advanced jacket integrates sophisticated defense pads for medium defense and low style. It can be worn in conjunction with armor modifiers. It is popular among pilots who expect to see some action.

x 10 (50%)
Directional Burst Shield
Light Thermal Defense
+ Defense
A directional burst shield is an instrument worn on the off hand that can project a body sized thermal wall as a personal shield using small disposable shield banks. Unlike more sophisticated shields like ones found on vehicles, the shield prohibits the user from returning fire through the shield while it is active. Turning the shield on and off is a simple task of ejecting spent shield banks and triggering new ones. The shield is most effective against light attacks.

Wisewoof Plushie
This small doll is a collector's edition of a series highlighting the heroes of famous events connected to the Prismatic Imperium. It features the ability to speak pre-recorded lines with a squeeze. This is Otto von Wolfsburg who currently leads the Prismatic Senate as the Chancellor and was involved with the arrest of Jesse Ladd. His wife was trapped in a biowaste container during a dangerous hostage exchange.

Prism Plated Dress
This attire is a respectable fashion statement for imperial citizens in public. It provides low defense and high style. It can be worn in conjunction with armor modifiers. It is popular among nobility and celebrities.

Zreaglares is a historic shopping district just north of the Prismatic Palace. Subsurface infrastructure connects the district directly to Mevlane Starport. It has access to both Crystal Lake and the North Lake. It features a grand mall recessed into the mega-structure as well as some parks and high volume traffic systems.