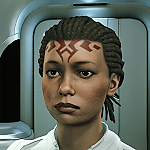 This standard Callaghan sidearm is a must have for personal defense for anyone when outside of the security of installations. It is a reliable weapon that uses common types of ammunition making it simple to use and maintain. This improved jacket comes in a wide variety of styles, materials, and colors and features all of the expected technological accessories of the 34th century. The strengthened pockets and expansion points is popular for well-geared pilots looking for a casual option for defense. Knife
Light Kinetic Weapon
Damage: +
Ability: If an enemy engages in melee while the user is using ranged weapons, switching to and attacking with the knife is a free action. A critical attack can ignore armor.

Every pilot should consider keeping a knife on hand as a last resort. This weapon can cut through flight suits and some armors with ease. The Diamond Market provides one as a gift to all CMDRs with an account. Archangel Blue Housecat
Historically known as the Russian Blue, the Irkalla Archangel Blue is a common feline in the Anahit System. They are recognized by their bright green eyes and blue-grey coat and are known for their friendliness and intelligence, though somewhat reserved. They have been known to play fetch and open doors, and are sensitive to human emotions. They are popular with pilots due to their affectionate bonds with trusted family. Genetic tampering or mixed breeding of the Archangel Blue is highly discouraged within the Empire.

This smart wired jacket comes in a wide variety of styles, materials, and colors and features all of the expected technological accessories of the 34th century. It provides some much needed protection for a street smart pilot.

This attire is a respectable fashion statement for imperial citizens in any circumstance as it conforms to any of the latest fashion trends. It comes in a wide selection of colors and patterns and offers some basic protection for the wearer. It is popular among public officials and nobility of the Empire.