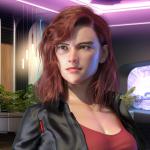 Fragmentation Grenade
Heavy Explosive Weapon
+++ Damage
This single use device can ensure a great deal of damage to a rather large area. It is recommended that a solder restocks prior to any engagement.

x 24 (120%)
Holo-Me Extender
This equipment can be installed at your location to extend your Holo-Me interaction ability in CMDR rented locations outside of the Diamond Plaza Hub. It is also useful for interacting with certain characters securely, especially characters in shadow.

x 625 (125%)
Diamond Ring Memory Drive
This large diamond can hold a Yottabyte of data beamed into its structure. While not secure, the ring can easily avoid detection during espionage missions. The largest drawback of this style of memory storage is that data cannot be edited, only deleted.

x 175 (70%)
Crystal Memory Bank
This high-tech device is capable of storing several Yottabytes of encrypted data making it an ideal way to transport secure information outside of your ship. Missions requiring data delivery in person will require a memory storage device of some kind.

x 500 (100%)
Sentry Drone
Light Thermal Weapon
+ Damage
This device acts as a personal support unit. While small enough to be carried by the user, it can still support a small pulse laser gun and basic sensors. It will spot hostilities before you do and comes with a replacement warranty. It will also alert allies to unidentified signatures including the use of drone countermeasures.

x 1,600 (100%)
Magnetic Boots
Classified as an armor modifier, this equipment uses complex computers to assist in balance while gripping to surfaces in limited gravity environments including zero-g. When combined with thrusters these boots can improve agility in combat.

x 300 (100%)
Visual Assistant System
Classified as an armor modifier, this compact device is worn on the face to assist vision at large ranges or in heavy weather such as smoke or fog. A built in computer will ensure that the user spots various desired shapes and symbols while identifying bodies through walls in most cases. It is not immune to E.G.G. attacks.

Installed in a utility slot, this small device will launch a shower of light weight tracking disruptors making the user nearly invulnerable to enemy drones, visual assistant systems, and sensors. It has enough ammo to last through most engagements. It creates very little heat.

Installed in a utility slot, this small device will scan individuals and compile bounty information as well as identify any registered citizen. It is a popular tool for bounty hunters and security personnel. It creates very little heat and will last through any mission.

Installed in a utility slot, this small device will detect encrypted data and decipher it before storing information in a memory device. It can also help prevent hostile viruses and hack into transmissions at the cost of heat buildup.

Installed in a utility slot, this small device will map out landscapes and structures and store the information in a memory device. It can allow the user to see building layouts during combat missions or give an explorer valuable insight to the environment.

x 100 (100%)
Combat Drone
Medium Kinetic Weapon
++ Damage
This device is an instrument of war. Despite its large size it is reasonable enough to be carried by the user and features twin multi-cannons, point defense, and basic sensors. While not the most agile, the drone does a superb job of defending the user while laying down suppression fire on hostiles.

x 3,500 (100%)
Tracking Bugs
These miniature hardware devices consists of a microphone, transmitter, and encrypted spy software bundled together in a lightweight casing. While generally impossible to purchase, the tracking bug allows a remote party to spy on the possessing individual. The ability to connect and interact with the device is impossible.
[This item cannot be reverse engineered and will continue to transmit if in your inventory.]

x 40 (200%)
Nisara Multitech Jacket
This high grade jacket from Nisara Multitech is an exemplary Imperial design serving as a defense unit for tactical operations providing high defense and medium style. It features 4 utility slots for defense improvements and can be worn in conjunction with armor modifiers. It is popular among mercenaries and explorers.

x 3,500 (100%)
Sniper Rifle
Heavy Kinetic Weapon
++++ Damage
This weapon was built for long range and features a standard high powered scope. Electronically fired rounds provide precise discharge with minimal recoil. This rifle is not recommended for close combat. It is slow to fire and easy to reload, but it does high damage.

Classified as an armor modifier, this computer grants the tools for hacking devices when plugged in. Devices include doors to security networks up to security level 5. It can be worn in conjunction with any clothing or accessories.
[1-Doors] [2-surveillance] [3-defense systems] [4-turret grids] [5-networks]

Electromagnetic Pulse Grenade
Utility/Laser Weaponry Countermeasure
+ Damage
This single use device can eliminate functionality of utilities, burst shields, and laser weaponry in a large area. It is also useful for destroying drones, vehicles, and turrets, larger drones like the Mongoose will require more to take down. Effective for the duration of a battle.

x 250 (125%)
Suppressed Pistol
Light Kinetic Weapon
+ Damage
This specialty sidearm is popular for discrete operations due to the effective sound and muzzle flash suppression system. It can fire almost silently and is easy to reload, though it does low damage.

x 900 (100%)
Military Grade: Strength
+1 to Strength
Intended to assist you in overcoming your mental limitations, Military Grade has created a wet drive program that will improve your strength. This will increase your power in combat as your muscles will output their full potential when needed without the mental safeguards naturally in place. It is only compatible with other Military Grade programs.

x 5,000 (100%)
Tactical Laser Rifle
Medium Thermal Weapon
+++ Damage
This federal rile has been customized to be a versatile mercenary weapon. Standard among Spencer Isaak's crew of elite forces, it can be strapped to the hip and operated with one hand. A laser suppressor system will help make quiet work of groups of enemies. It can fire quickly and rarely needs to recharge, though it inflicts medium damage.

x 1,000 (100%)
Flash Bang Grenade
Disorienting Weapon
+ Damage
This single use device can disorient unsuspecting opponents by disrupting their vision and hearing for some time by creating a bright flash of light and concussive blast. Drones are not impacted.

x 25 (100%)
RemLock Pack
This kit can be a real lifesaver as it is the most advanced technology for prolonging life in an event of decompression. It has preserved lives of pilots blown out into space without a pressurized suit, though it is not recommended for such extremes.

[This item is used during decompression. Disposable items are consumed after a single use.]

x 100 (100%)
Light Armor Shield
Light Kinetic Defense
+ Defense
An excellent source of rapid deployable armor, these conjoined plates will spring into cover the moment it makes hard contact with the ground. It will defend the wearer from kinetic attacks from small and medium fire indefinitely. Large kinetic attacks will be minimized.

x 115 (115%)
Spy Drone
This small device is undetectable by automated turrets, cameras, or other drones. While small enough to be carried by the user, it is jam packed with sensors. Additionally it is incredibly quiet and avoids detection from enemies when scouting. It can fit in ventilation systems and slip through small passageways to reach restricted areas beyond locked doors. It will spot hostilities before you do and comes with a replacement warranty.

x 5,500 (110%)
Supratech Nini 1080
This small implant is a neural augmentation computer that assists the brain. It can be discreet or obvious based on the interests of the user. Depending on the program disks installed it can perform a wide range of functions. This model has two general slots and one utility slot.

x 16,000 (100%)
Havok Jetpack
Unlike the common zero-g thruster systems on the market, Havok and Sons developed a device that excels in both micro gravity environments and atmospheric worlds with up to 1.5g. They are an excellent way to get a vertical advantage when planet side and will increase the agility of the user in low gravity or the void. Use is limited to short bursts and is liable to overheat quickly after continued use. It is lighter than other similar models.

x 5,000 (100%)
Automated Turret K1
Medium Kinetic Weapon
++ Damage
Light framed computer operated multi-cannon will target hostiles using smart software that analyzes data from the squad. It can be deployed at anytime during a battle but redeployment takes time. It has a moderate firing rate and excellent armor.

x 3,000 (100%)
⛭ Military Grade: Combat Interface
utility that allows user to interface with their military equipment. It will project an awareness of ammo counts, projectile trajectories, IFF identification and other valuable military metrics. Includes operations manuals for items linked to it enabling quick familiarity with gear. Utility programs can be installed in a utility drive slot and does not conflict with other brands.

⛭ Military Grade: Arts of Mars
This neural augment contains a full library of combat techniques contained exclusively within a muscle memory profile. This enables the user to quickly master martial arts in five disciplines though routine practice is highly recommended. The program is dependable during a fight or flight response situation. Utility programs can be installed in a utility drive slot and does not conflict with other brands.

Stealth Boots
Classified as an armor modifier, this equipment muffles sounds caused from movement over a variety of terrain thanks to the work of computer regulated gel pads. While making the user silent it gives no armor benefits.

x 500 (100%)
x1
Vigor Recruit Uniform
Official uniform worn by all recruits in the Prismatic Imperium Branch of Vigor. As an entity of the government, Vigor personnel are expected to maintain their uniforms and abide by the dress code enforced by the Lord Warden. The uniform offers low defense and high style making it ideal for diplomacy but a poor choice for direct combat. Wearing such uniform while not in active service to the Branch of Vigor is a high offense.

x 200 (100%)
x1
Vigor Warden Uniform
Imposing uniform worn by the Wardens in the Prismatic Imperium Branch of Vigor. Serving as the Head of Defense in the Senate, the wearer carries the responsibilities of all branch activities from government security to extraterrestrial program enforcement. The uniform provides low defense and high style. It is recognized by Cubeo Society as militant law and order, having sway over the Prismatic Senate.